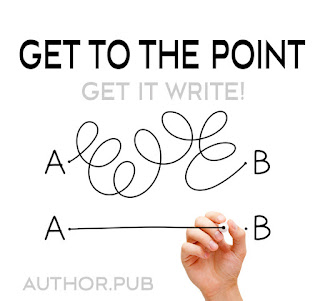 Concision can play a huge role in the impact of your message. No one wants to wade through unnecessary words, and worse, wordiness can weaken your writing.
Here are some easy ways to tighten your writing as you self-edit. You are self-editing before you call your copy editor, right? Of course you are.

Elminate the make:  make a promise, make a deal, make a bet, make dinner (okay, you could make dinner.) But you get the idea: doesn’t it sound better to promise, negotiate, wager? Also, to cook dinner sounds more precise, doesn’t it? Or better yet, to boil pasta, simmer tomato sauce…

No basis for basis: on a monthly basis, on a weekly basis, on a temporary basis. Try monthly, weekly, temporarily. Even “each month” is better, though that’s still one word too many.

Eliminate redundancies. Your editor will love you for this one.
Free gift
Each and every one
Share in common
Because the reason is (the reason is because)
Ask a question
Advance planning, advance reservations
Prior plans
The month of July
Repeat over and over
Positive (or beneficial or desirable) benefits
Sudden explosion, sudden impact, sudden anything, really. “Sudden” is a cheesy way to grab attention.
Close proximity

Your high school English teacher isn’t being paid to read your writing, and you don’t get extra credit for extra words. So make it easy for your reader, and they may just love you back.

JoAnne Dyer is an editor, writer, proofreader, and event planner. She founded Seven Madronas Communications in 2015. Seven Madronas specializes in helping change-makers and people doing good in the world. She’s edited dozens of nonfiction books and writes regularly for Nest Publications and The Connector magazine. When she’s not agonizing over subject/verb agreements, she’s hiking in the red canyons of Utah or cooking vegetarian dinners in her native Seattle, Washington.

Email ThisBlogThis!Share to TwitterShare to FacebookShare to Pinterest
Labels: Avoiding common writing blunders, How to write concisely, how to write well, What to avoid in writing, writing tips for authors, Writing well

(AND OTHER TIPS FOR AUTHORS) 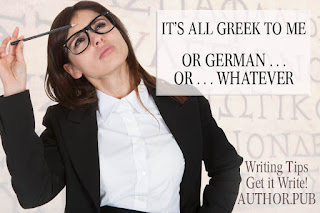 1-- Yes. German. Only German capitalizes common nouns. English does not.  Capitalize the noun only when it is part of an official title, as in “CBS News interviewed President Barack Obama.” But “Hillary Clinton is running for president.” As the letters editor at a major metropolitan daily newspaper, I can’t tell you how many times I’ve had people write sentences such as this: “I think our City Council is wasting the Taxpayer’s money on building a new Bus Lane.” As they say in German, “Nein!” Lower-case those nouns. And check that apostrophe while you’re at it. I’m sure the money isn’t coming from just one taxpayer. Correct sentence? “I think our city council is wasting the taxpayers’ money on building a new bus lane.”
2-- De-clutter. Think about eliminating those unnecessary explanatory phrases that mire your poor protagonist in syntactical quicksand: “I saw that there was a beautiful bouquet of roses in a vase on the table.” Better: “There was a beautiful bouquet of roses in a vase on the table.” There’s really no need to say that your protagonist saw something as a preamble to describing what he or she saw. The reader will know intuitively that the “I” in your novel is the one who saw the roses. You can do this for third-person protagonists, too. Opt for: “He’d never heard such nonsense in his life,” instead of “He felt that he had never heard such nonsense in his life.” Say “The thunderstorm scared him,” rather than “He felt scared by the thunderstorm.”
3-- The least said, the better. The fewer words you use, the more evocative the scene will be in your reader’s imagination. Don’t bog your prose down in “whiches” and “thats.” That kind of language is for lawyers, not authors: “The dog that my neighbor used to have, which was a cocker spaniel that died years ago, liked to lie on the porch.” Yikes! Talk about a convoluted chasing of the authorial tail! Try this instead: “My neighbor’s cocker spaniel, dead these many years, liked to lie on the porch.”
4-- Choose active over passive. Make the subject of your sentence take the action, rather than focusing on the object that received it. Example: “The boy was hit in the eye by the hockey puck.” For something shorter, sweeter and to the point, give the action to the puck: “The hockey puck hit the boy in the eye.”
5-- Trust your reader to fill in the blanks. I once read a manuscript that described a woman’s trip to a grocery store in San Antonio. She left her house, pressed her key fob to unlock her car door, opened the door, got into the driver’s seat, closed the car door, turned the key in the ignition, backed out of the driveway, drove to the store (and on the way, the author named every street she drove on), pulled into the parking lot, turned off the engine, got out of the car, locked the door and went into the store. Whew. But the author wasn’t done quite yet. Once inside the store, the woman went to the produce department and the author proceeded to describe every fruit and vegetable on display, as well as all the customers shopping in that aisle. He could have written instead: “Cathy went to the store and bought a bag of oranges,” and the reader would have instinctively known that Cathy did all the minutiae involving her car, without needing the details written out. The other customers should have been described only if they were going to play some role in the plot; otherwise, the reader will understand, without all the gory details, that other people were shopping at the same time as Cathy.
6-- Chuck the chuckles. Use “said.” It’s simple and unobtrusive. “I remember when you slipped on the banana peel,” he chuckled. Actually, he couldn’t have. Listen to real people talk. If they’re chuckling, they stop to say something. They can’t chuckle and talk at the same time without snorting and choking.
7-- What’s in a name? Give your characters names appropriate for the time period they’re living in, or you’ll shoot down your story’s credibility. I read a novel once whose heroine lived during the Civil War. The author had named her Jennifer. Sorry, but Jennifer is a 20th century name which came into popular usage after George Bernard Shaw used it in his 1906 play, The Doctor’s Dilemma. Before that, it was known only in Cornwall. Is your protagonist a 14th century mystic sighing away her days in a crumbling and drafty convent? Great, but don’t call her Kailey or Alyssa.
8-- Listen to that gut feeling. If something isn’t working in your novel, whether it’s a paragraph, a single sentence or a whole subplot, let it go and try a different approach. When you try to force something that doesn’t work, it reads to editors, literary agents and publishers like you forced it. You can’t fool them.
9-- If you’re writing an article for a magazine or newspaper, all the above rules apply, except of course, the one about names. Show respect for the submission guidelines, especially on word counts. At the newspaper where I work, we have a policy that letters must be no more than 150 words long. Yet, people keep sending in 500-word missives and are miffed when they’re not published. When I was a reporter, I quickly learned to write my stories to length because I found that if I didn’t, the first thing the copy editors would cut was always the paragraph I loved best. Spare yourself that grief and stick to the assigned word count.
10-- To learn from the technique and style of a genius, read The Lonely Passion of Judith Hearne or The Luck of Ginger Coffey, two novels by Brian Moore. He can deliver a devastating one-two punch to your emotions with just three words. Not one word is wasted. That’s what you’re aiming for.


Naomi Lakritz has been writing and editing at daily newspapers for 37 years. She is a columnist, editorial writer and the letters editor at the Calgary Herald. She owns Naomi Lakritz Editing Services, based in Calgary, Canada, and edits manuscripts, website content, academic papers and a variety of other documents. She also translates from French and Italian into English. Her website is www.quantumorange.net and she can be reached at njlakritz@shaw.ca
Posted by Author.Pub at 4:51 PM No comments:

Email ThisBlogThis!Share to TwitterShare to FacebookShare to Pinterest
Labels: Common writing errors to avoid, Common writing pitfalls, How to get it right in writing, how to write well, Tips for writers, writing tips for authors, Writing well for authors
Newer Posts Older Posts
Subscribe to: Posts (Atom)